The ‘official’ operatic offering is so rich in Berlin that I’ve found myself slow to explore the city’s alternative scene. But it’s got to the stage in the year when I compile lists of New Year’s Resolutions, and one of them for 2018 will be to explore more of what the German capital has to offer beyond its three main opera houses. I might even be a resolution I’ll be able—and want—to keep to. As a first step, I thought I’d share some thoughts on three ‘alternative’ operatic events I’ve been to over the last couple of months.

I start with the most recent, the latest venture by the enterprising Puccini’s Toaster, an event that was perhaps not strictly operatic, but which was, as far as anyone seems to know, a first: a performance of Schubert’s Winterreise that featured a different singer for each song. Twenty-four singers; 24 songs. Wisely, the presentation was also strictly non-operatic, as straightforward as possible: chairs for the singers were arrayed in a semi-circle around the piano, each singer simply stepping up in turn—no acknowledging each other or the audience.

It was certainly felt like the best way to go about it, and to instil such discipline on two-dozen singers—shades of herding cats, one imagines—certainly speaks volumes for Puccini’s Toaster’s resident director, Caroline Staunton, and music director, Rebecca Lang. The whole event, meanwhile, spoke volumes about how well connected the company is, as well as about its attitude to the sort of logistical challenges lesser outfits might dismiss as insuperable. 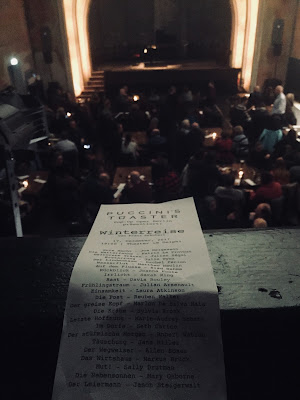 It also reflects the sheer pool of talent that can be called upon in the German capital, with those who turned up to play their part, however small, ranging from Deutsche Oper stalwarts to younger singers just starting out. Inevitably standards varied, both in terms of the voices the interpretations, and the event served to highlight in many ways what an exacting medium song is—some songs certainly were given something more akin to operatic treatment, for example.

One constant, though, was Jean-Paul Pruna’s alert piano playing, managing to create a sense of continuity as all around him changed. The whole performance also served as a challenge to those listeners and performers who tend to view song cycles—and this one in particular—as music drama manqué, allowing us to appreciate every song with fresh individuality.

In fact, excellent baritones seemed to dominate the evening (a fact that had not escaped the attention of the Barihunks blog). Allen Boxer was especially impressive in ‘Der Wegweiser’, and Markus Brück, last seen by me as Rigoletto at the Deutsche Oper, offered a consummate ‘Das Wirtshaus'. There were seriously impressive voices on display from, among others, Julian Arsenault (‘Frühlingstraum’), Marlon Da Silva Maia (‘Der greise Kopf’) and Seth Carico (‘Im Dorfe’), even if we occasionally could have done with a little more intimacy in approach. 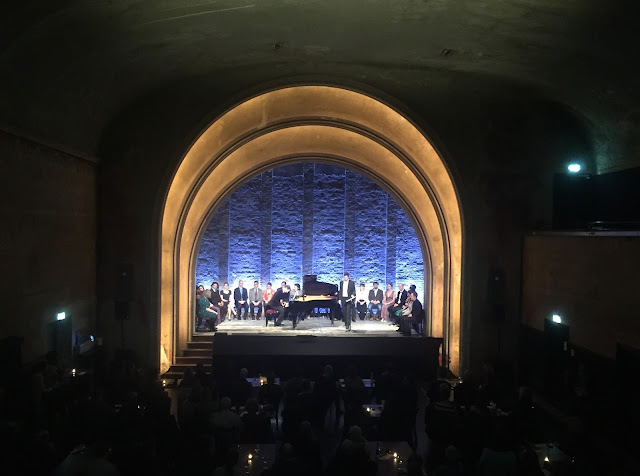 There was a fine selection of mezzos and sopranos, too. The former included the rich-voiced trio of Sarah Ring (also the company’s Intendant) in ‘Irrlicht’, Laura Atkinson in ‘Einsamkeit’ and Sylvia Bronk in ‘Die Krähe’ (although her colourful outfit, I couldn’t help thinking, was more reminiscent of a bumble-bee). At the other end of the spectrum were the tidy sopranos of Joanna Foot (‘Rückblick’), Jana Miller (‘Täuschung’) and Marie-Audrey Schatz, whose focus and delicate vibrato brought out the best in the ‘wein, wein’s of ‘Letzte Hoffnung’.

I made special note, too, of Rachel Fenlon’s considered and refined account of ‘Der Lindenbaum’, Sally Drutman’s characterful ‘Mut!’ and Mary Osborne rich, determined ‘Die Nebensonnen’. But everyone—including some, I apologise, I haven’t mentioned—added to a unique and thought-provoking event.

A special word, too, for the venue, the remarkable Ehemaliges Stummfilmkino Delphi, on the Prenzlauer Berg/Pankow border in East Berlin. It’s a grand and evocative 1920s former cinema, with a modest stage contained within elegantly curved proscenium, and outstandingly clear and direct acoustics.

It was dusted off and reopened only in 2012 after more than half a century of, as its website poetically puts it, ‘Dornröschenschlaf’. But this event was part of a fundraising effort that was needed after the place was stripped of all its technical equipment (worth tens of thousands of euros) in a robbery earlier in the year. It played host to Puccini’s Toaster’s La bohème this time last year, too, and the company returns there for La traviata in April. Let’s hope it continues to thrive.

I’d also seen Puccini’s Toaster’s previous show in November, at a different venue a bit further round to the North West in Wedding: Tangoloft, Berlin. A joint venture with MOOD Opera of Detroit, it juxtaposed a staging of Gian Carlo Menotti’s bizarre (and not a little misogynistic) 1939 radio opera The Old Maid and the Thief against a relaxed second-half cabaret of songs by Eisler, Weill and contemporaries.

The venue’s airless acoustic took a little adjusting to, but Staunton did an excellent job of staging a work whose pacing is clearly designed for the different demands of radio opera—although admittedly I’m not entirely clear what those might be. A framing device helped both to tie the swift scenes together and slightly distance us from the piece’s less-than-flattering take on women, depicted as going weak at the knees (and in the head) at the arrival of a mysterious and handsome stranger (the excellent Reuben Walker, the deliverer also of a fine ‘Die Post’ in the Winterreise), mistakenly believed to be a dangerous thief.

Philipp Lang and Brigitt Bayer were excellent as Mr and Mrs Pinkerton (the Madame Butterfly reference, if indeed there was one, was lost on me), and Ring was brilliantly scheming and seductive as Laetitia, the young maid who is instrumental leading the titular Old Maid, Miss Todd, astray. And in that role Danielle Wright was powerfully committed, her big mezzo used to fill out what became an increasingly rich and tragic character.

Rebecca Lang conducted a small chamber ensemble in her own ingenious reduction of the score, which would be good to have a chance to hear within a more sympathetic acoustic. She was also on hand as one of the accompanists (the other was Kunal Lahiry) who made the most of a rickety piano in the songs of the second half.

Finally, and going yet further back in time as well as heading south from the Tangoloft to the Acker Stadt Palast in Mitte, a few thoughts on Stephen Crowe’s Francis Bacon Opera, which I caught in late October. This had already been seen at the Tête à tête festival in London (the video below has extracts from that incarnation) and was being unleashed on unsuspecting Berliners here for the first time—the composer’s previous opera, Pterodactyls of Ptexas, was seen here last year, though alas not by me.

This new work struck me as a little gem, though, with Crowe achieving remarkable results from limited resources: two tenors; a pianist on an old upright; a simple set consisting of cloths variously stripped away, hung up or laid down, with projections of skeletal versions of famous Bacon canvases.

The libretto, if that’s not too conventional a term, consists of a word-by-word transcript of Melvyn Bragg’s 1985 South Bank Show interview with Francis Bacon, which famously saw the pair get increasingly sozzled in a variety of locales.

The comedy is inherent, of course, and Crowe certainly doesn’t underplay this, demanding plenty of jazzy flourishes and outrageous Gerald Barry-esque distortion and elongation from his singers, accompanied by spidery tinkles, splashes and bashes on the piano. But there’s another important side to the work, too. The composer produces some music of disarming, unexpected delicacy and loveliness as he searches for the weird beauty of these encounters: of the burgeoning inebromance between Bacon and Bragg, of the strange revelations that come as befuddled questions stumble past woozy answers and logic and language start to sway on their axes.


The performances from Christopher Killerby (Bacon) and Oliver Brignall (Bragg) were terrific, and necessarily fearless and committed, right up to the final knocking back of mini bottles of spirits—they were handed out to the audience too, but I chickened out and left mine under my seat. Joseph Houston was heroic in the kaleidoscopic demands of the piano part, and Tone Aminda Gøytil Lund had done an ingenious job conjuring up so much from so little with her set and costume designs.

The piece itself was especially welcome for being ideally paced (at a short, sharp 50 minutes), and for avoiding the double pitfalls of pretentiousness and wilfully abstruse vocal writing—it was certainly demanding, but never, it seemed, simply for its own sake.

It was an arresting, funny and engrossing show, but a beguiling and strangely affectionate one too.

The small matter of renovating its Unter den Linden home has meant that the Staatsoper in Berlin, by necessity, has come rather late to the Monteverdi anniversary party. Nevertheless, its new production of L'incoronazione di Poppea opened at the weekend hot on the heels of its new Hänsel und Gretel. By this third performance, it had moved on to its second scheduled Poppea in the shape of Roberta Mameli – Anna Prohaska had been the first.

[Read the full review at Bachtrack]
Posted by Hugo Shirley at 14:08 No comments:

So staggered and diluted has the process of the Staatsoper’s reopening been that this first night of its new Hänsel und Gretel hardly felt like an event at all. The great and the good had been assembled for the previous evening’s 275th anniversary concert, but for the first operatic performance in reopened house – I’m inclined not to count the ill-advised and ill-executed staging of Schumann’s Faust-Szenen in October – a few balloons on the building’s scrubbed-up façade was about it...

[Read the full review at Bachtrack]
Posted by Hugo Shirley at 14:06 No comments:

Mahler’s final completed symphony has been something of a favourite for recent music directors of the Berlin Philharmonic, although the orchestra clearly likes to ration its performances. Simon Rattle conducted the last one here six years ago, but with the conductor and orchestra having just returned from a long tour in the Far East – and having given a guest appearance last week at the newly sort-of reopened Staatsoper unter den Linden – the baton was passed to Bernard Haitink.

[Read the full review at Backtrack]
Posted by Hugo Shirley at 14:11 1 comment:

Hugo Shirley
I am freelance critic, writer and musicologist based in Berlin. I have held editorial posts at Gramophone and Opera, was opera critic of the Spectator and have worked as a critic for the Daily Telegraph and Financial Times. I was editor of 30-Second Opera (Ivy Press, 2015), now also available – when I checked last – in French, German and Spanish. My PhD (awarded from King's College London in early 2011) was a critical reassessment of Richard Strauss and Hugo von Hofmannsthal's 'Die Frau ohne Schatten'; further details of my academic work can be found under 'Publications and Papers'. If you'd like to email me, I can be reached on hugojeshirley[at]gmail.com.

Fatal Conclusions is designed to serve as a modest outlet for various reviews (of varying levels of formality and punctuality) and ideas regarding what's going on in the Opera and Classical Music worlds--and, if I'm feeling adventurous, beyond. Thanks for popping by. I hope you enjoy reading and please feel free to leave comments.