Rita in the pub, Grimes on the Beach, Death in Venice, Don Carlo in Toulouse, Strauss in Chelsea

A lot to cover in this post, which I'm afraid will veer very much towards the musing/rambling end of the spectrum rather than constituting anything terribly useful. They're all things that have got me reflecting on commemoration and the importance of place, something which I will be exploring in what I hope will be greater depth (rather than lengthier superficialness) at a conference, 'Staging Operatic Anniversaries', at Oxford Brookes in September.

The most headline-grabbing of these commemorative exercises has been this week's Grimes on the Beach in Aldeburgh, of which you can read my review here. And I'm not going to add much here, since otherwise I'll have nothing to say in the longer review that will be appearing in the next Opera. Here, though, is a little picture I took, to add the far more impressive official ones. 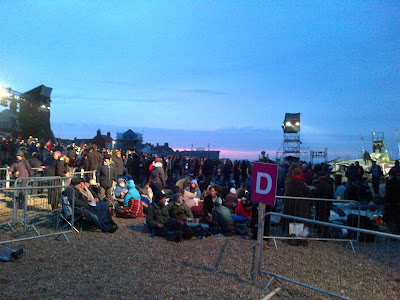 I certainly felt, having been there, that I'd experienced something pretty special, not least because of its unrepeatability. And I'd be surprised if that other headline-grabbing, on-location anniversary event, Das Rheingold on the Rhine, will come anywhere close--in fact, that performance, which seems to take the whole thing to absurd lengths, doesn't seem to have grabbed that many headlines at all.

The next evening's Britten, Death in Venice at the Coliseum, was warmer, temperature-wise, even if I find the piece itself rather cold, despite the sunbaked haziness (in the best, visual sense) of Deborah Warner's production. It's hard to imagine a better case being made for the work, with ENO living up to its reputation for staging Britten with a great cast and the orchestra, under Edward Gardner, once again sounding like a real virtuoso ensemble.

Things were a lot cosier last week, too, in Covent Garden's Sun Tavern, where Pop-Up Opera performed an unusual double bill of Donizetti's Rita and Pergolesi's La serva padrona (I saw it last Thursday, but it's heading off on an extensive tour in London and many places besides, info here). Rita's theme of domestic violence has suddenly become all-too-relevant, mid Nigella-gate, the opera's 'comedic' treatment of it now also seeming even more unforgivably glib--those were very different times, I suppose, and this is a work that, despite some characteristically entertaining and fizzy music, is sort of akin to those fine paintings of fox-hunting and pipe-smoking on the Antiques Roadshow: a hard sell whatever their artistic qualities. The double bill is doubly unusual, though, in having the works performed together: not exactly 'gleichzeitig' in the manner of Ariadne auf Naxos, but with their scenes interleaved to provide a soap opera-like switching between the two plots. It works extremely well, and is (too?) highly entertaining. It's got me wondering, too, if a similar device could be applied to anything else: directors, like most recently Stephen Barlow at Opera Holland Park, are always linking Cav and Pag, so maybe someone should go the whole hog and do them gleichzeitig...

Now a bit more death. I was in Toulouse yesterday for a rather brilliant Don Carlo--I'd been lured over by the prospect of Christian Gerhaher as Posa and Christine Goerke, ahead of her Royal Opera Elektra this Autumn, as Eboli, and she, in particular was fantastic. (I'm not giving too much away, since I'm reviewing it for Opera.) With a bit of time to kill earlier in the day I found myself at the city's amazing Cemitière de Montaudran, a vast, elaborate and slightly run-down hymn in marble and stone to the power of, and need for, commemoration, memorialization and, to use that wonderful sort-of-word, marmorealization. 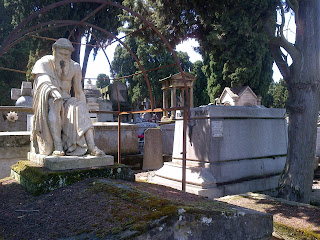 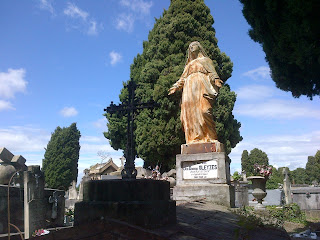 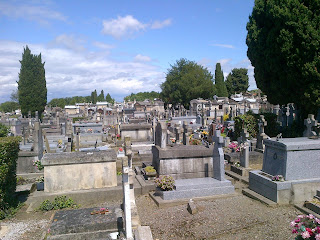 It was a shame the weather was, for that half hour at least, bright and blue-skied rather than grey and gloomy, but I was struck--and not a little disturbed--by how many of these (below) there were, looking suspiciously like filing cabinets: death, it seems, will forever be tied up with bureaucracy. 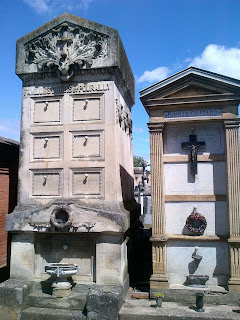 Anyway, it all very much got me in the mood for Verdi's great brooding masterpiece, shot through as it is with all-is-vanity gloom and religiosity. 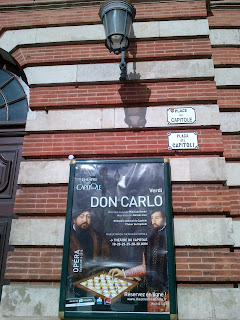 And appropriately enough, given my theme, despite using the 4-act Italian score, the performance (conducted by the much-underrated and much-overused-in-much-less-rewarding-repertoire Maurizio Benini) included the scene from the 5-act French score, after Posa's death, in which Phillip sings a line that was reused in the Lacrimosa in the Requiem.

Finally, I'll be off to a rather happier commemoration tomorrow, to hear the combined choirs of King's College London and Gonville and Caius, Cambridge give a performance of Strauss's hugely difficult, extraordinarily luxurious and beautiful Deutsche Motette, scored for 16 parts and 8 soloists, exactly a century after its completion (the premiere was six months later, in Berlin on 2 December 1913). It's at Holy Trinity, Sloane Square, as part of a mixed programme that includes some other interesting German repertoire--looks like tickets are available here.

If their recording is anything to go by (I've been lucky enough to get a sneak preview), it should be quite something. Here, in the meantime, is a snippet of the Latvian Radio Choir having a crack...

Hugo Shirley
I am freelance critic, writer and musicologist based in Berlin. I have held editorial posts at Gramophone and Opera, was opera critic of the Spectator and have worked as a critic for the Daily Telegraph and Financial Times. I was editor of 30-Second Opera (Ivy Press, 2015), now also available – when I checked last – in French, German and Spanish. My PhD (awarded from King's College London in early 2011) was a critical reassessment of Richard Strauss and Hugo von Hofmannsthal's 'Die Frau ohne Schatten'; further details of my academic work can be found under 'Publications and Papers'. If you'd like to email me, I can be reached on hugojeshirley[at]gmail.com.

Fatal Conclusions is designed to serve as a modest outlet for various reviews (of varying levels of formality and punctuality) and ideas regarding what's going on in the Opera and Classical Music worlds--and, if I'm feeling adventurous, beyond. Thanks for popping by. I hope you enjoy reading and please feel free to leave comments.